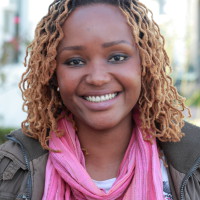 Wayua Muli has a Bachelor’s degree in Sociology and French from Kenyatta University (Nairobi). She has 17 years’ work experience as a writer and editor with various publications around East Africa.

Between 1998 and 2003, she was a writer for the Saturday magazine, a Nation Media Group (NMG) publication, and was thereafter tasked with the job of creating an entertainment publication for The Standard (Media) Group in 2003. Pulse magazine (a supplement in the Friday Standard newspaper), went on to become the country’s most popular insert. It also led to her next opportunity as the Features Editor for The Nation Media Group’s Uganda newspaper, The Monitor.

In 2006, Muli came back to Kenya to start a stand-alone magazine for women between the ages of 18 and 24. Eve Girl was the younger variant of the established and respected Eve magazine title. The title was circulated for two years and later purchased by The Standard Group. She subsequently worked as the first Society Editor for The Nairobi Star newspaper and then as the Editor for East Africa’s version of South Africa’s top-selling women’s title, True Love magazine (published by Media 24).

She is currently the editor of the Saturday magazine insert in NMG’s Saturday Nation.