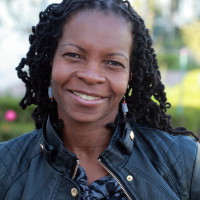 Gwangwa has served as Station Manager (Managing Director) for 702, a talk radio station based in Johannesburg, South Africa, from 2005 to date.

Previously, she worked at the South African Industry Regulator for Communications (ICASA) and has practised as an attorney at the State Attorney. Under her leadership at Primedia Broadcasting, 702 prospered and grew its audience from a listenership of 238 000 to the current 823 000. This gave the station an opportunity to grow its gross revenue from about R70-million in 2005 to the current R320m.

She is the Chairperson of the National Association of Broadcasters. She has also recently been appointed to the Broadcast Research Council of South Africa.

Gwangwa was the recipient of the Woman in the Media Award in 2008. She is an Independent Non-Executive Director of Clientele, a Financial Services company listed on the JSE. She is also a Patron of FOTAD, a girl-child development project for girls aged 12 to 19 years who come from previously disadvantaged areas.