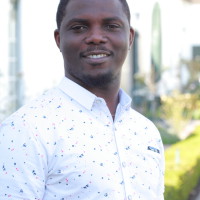 Olawunmi Ojo is a development journalist and the Editor, The Point Newspaper in Nigeria. His journalism career has seen him work at various media organisations including The Economy, The Guardian and The Punch before joining The Point.

An Animal Science major, he took to journalism while at the university and went on to serve as Editor-in-Chief of the university’s Union of Campus Journalists.

He joined The Guardian in 2004, and reported on a variety of pertinent subjects.

In July 2008, Ojo joined The Economy, published by the Development Economic Resources Publications Limited as a Staff Writer. He was promoted as the News Coordinator before leaving in November 2009.

Ojo rejoined The Guardian (Saturday Desk) In 2009 and, at various times, was privileged to edit and co-ordinate such sections of the Saturday title as the special feature cover pages, business/brands, tourism, people and places, and society pages, while still writing.

He is an alumnus of the Lagos Business School (LBS) Executive Training in financial journalism, an alumnus of Pan-Atlantic University (PAU)’s School of Media and Communication, and a grantee of the Wole Soyinka Centre for Investigative Journalism (WSCIJ).