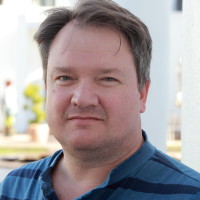 Educated in Scotland and South Africa, Kevin Ritchie holds a Bachelor’s degree in Law and African Political Studies, as well as a Post Graduate Diploma in Media studies from Rhodes University in Grahamstown.

Ritchie began his career in Kimberley in 1991 with the Diamond Fields Advertiser. He covered the end of apartheid and South Africa’s transition to democracy from the world’s erstwhile diamond capital.

He became Editor in 1993 at the age of 28 and was appointed as Manager in 1996. He ran the paper until 2003, complete with its own presses, first under the auspices of the Argus Printing and Publishing Company and then Anthony O’Reilly’s Independent News and Media.

In 2003 Ritchie moved to Johannesburg to take over Independent Newspapers’ Special Projects Division, where he was responsible for conceptualising and executing group wide supplements and overseeing a budget of R50-million. 18 months later, he moved back to the news division, where he headed the group’s editorial synergy division, co-ordinating the editorial planning of 18 newspapers in five different centres across South Africa and managing syndication contracts.

Ritchie was then appointed Managing Editor of the Saturday Star, a position he held for five years before moving to The Star in 2012 as Deputy Editor. He became Editor of the group’s flagship 128-year-old daily title in 2014.

Ritchie has received awards for his work, as a Hard News Reporter, a Columnist and a Feature Writer. He has also written an acclaimed two-volume handbook for court reporters in South Africa.