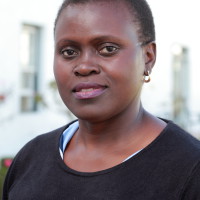 Juliet Nabwire holds a Master’s degree in Human Rights. Nabwire also has a Bachelor’s degree and a Postgraduate Diploma in Education from Makerere University, Kampala.

Nabwire has worked in the print media in various capacities for over 10 years. In 1997 she was appointed as Sub-editor and rose to the position of Editor at the New Vision Newspaper.

Nabwire was one of the pioneers of the Newspapers in Education (NiE) project at the New Vision. As NiE co-ordinator, she was the link between the classroom and the newspaper, dealing with circulation, training teachers in the use of newspapers in the classroom, and she was responsible for the budget and evaluation for the project. She continued with the Newspapers in Education project on a larger scale at the Daily Monitor Publications, a newspaper group in Uganda, this time as both Manager and Co-ordinator of the project, and Editor in charge of Education.

She left print media to work as a Communications Specialist at Save the Children, an international non-governmental organisation. While there, she was tasked with managing the internal and external communications of the organisation, between 2006 and 2008. In 2008, Nile Breweries, a subsidiary of the SABMiller group, hired her as a communications manager.

In 2011, Nabwire joined The EastAfrican, a regional newspaper that is part of the Nation Media Group of papers. She works as a Sub-editor at the headquarters in Kenya.