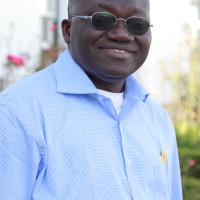 Issa Aremu has a Master’s degree in Labour and Development from the Institute for Social Studies (ISS) in The Hague, The Netherlands. He holds a Bachelor’s degree (honours) in Economics from the University of Port Harcourt, Nigeria and is an alumnus of the George Meany Labour Centre, Maryland, Washington, USA (1987 and 2003).

Aremu joined the Nigerian labour movement as Head of the Economic/Research department of the Nigeria Labour Congress. In August 1989, he joined the National Union of Textile Garment and Tailoring Workers of Nigeria. After 20 years, he became the General Secretary of this union.

Aremu was a two-term Vice-President of the Nigeria Labour Congress and was also elected as its Deputy President. He is the General Secretary of the Alumni Association of the National Institute for Policy & Strategy Studies.

Aremu is a recipient of several prestigious awards and recognitions worldwide.