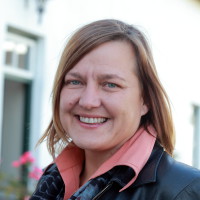 Ingrid Martens has 17 years of media experience in the African and international television industry. Martens holds a Master’s degree in Culture and Media Studies. She has also completed numerous courses around the world and graduated with distinctions from the first-year intake of the Thabo Mbeki African Leadership Institute.

As part of her experience, she worked with a Nigeria-based television company where she developed their strategy to roll-out a digital satellite Pay-Television for West Africa. During her three years with this company she bought more than 40 channels for an African audience and continued to manage relationships with global players like Discovery, KidsTV, Al Jazeera and the BBC. She was also a member of the initial SABC 24-hour news channel task team.

As an independent filmmaker, her film Africa Shafted: Under One Roof has been selected for festivals around the world and continues to stimulate debate about our common humanity and being African. It won the Most Original Documentary award in Mexico.

She received a CNN African Journalist Health Award for her story on virginity testing.