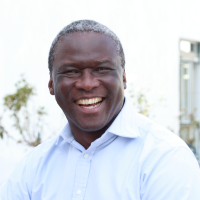 Isaac is the co-founder and Chairman of the African Leadership Initiative, which is part of the Aspen Global Leadership Network and is focused on the development of effective, values-based, community-spirited leaders in Africa. Furthermore he has recently founded the Young African Leadership Initiative to focus on leadership development of fellows between the ages of 25 and 35. His own passion for leadership began early in his career when he was made a 21st Century Trust Fellow and was named as a World Economic Forum Global Leader of Tomorrow in 1996.

Isaac is a founder and Chairman of Letsema Holdings and is focused on building a values based, long term, buy and hold investment company. In 1996 he founded Letsema Consulting, which is now a leading black owned and managed management consulting company in South Africa. Off that platform Isaac created an investment company that has built several successful companies of long standing. Isaac has a demonstrated ability to innovate and grow businesses in challenging economic circumstances. It was as a result of one of these investments that he joined Barloworld ultimately to become their first black executive director.

Isaac was educated at Wesleyan University, a liberal arts college in Connecticut USA, and Oxford University in the UK where he studied as a Rhodes Scholar and obtained an M.Phil in Management Studies